This section was last updated on June 2021

A new stochastic approach of assessing the oil sands has been developed to capture subsurface variability. The aim of this new methodology is to increase accuracy and transparency and to create a framework that allows oil sands reserves to be updated on a yearly basis, consistent with Inter-Provincial Advisory Committee on Energy (IPACE). 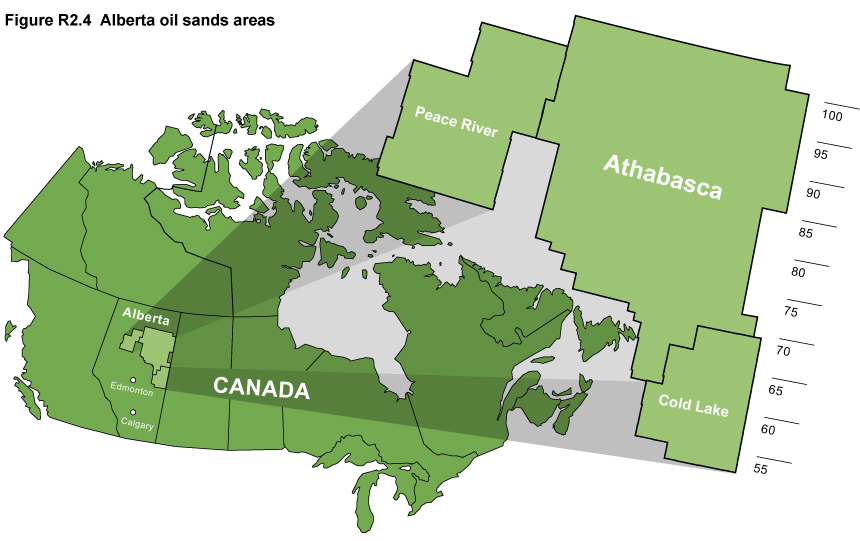 Oil sands are a mixture of sand, clay, water, and bitumen. Bitumen is extremely viscous oil (up to 4 times more viscous than peanut butter) that does not flow on its own. Heat or other lighter hydrocarbons are added to reduce the viscosity of the bitumen to allow it to flow. To produce bitumen, methods such as mining, steam-assisted gravity drainage (or SAGD, mainly in Athabasca), or cyclic-steam stimulation (or CSS, mainly in Cold Lake) must be used. Oil sands shallower than 75 m are extracted in open pit mining operations. For areas deeper than this, the clearing of overburden becomes too costly and requires underground in situ methods using steam or steam with solvents.

SAGD is a process that uses steam to heat the reservoir to reduce the viscosity of the bitumen. This requires at least two horizontal wells to be drilled: an injector on top and an underlying producer, generally located 5 m below the injector. The upper well injects steam into the reservoir, creating a steam chamber and heating the bitumen up to 230oC, reducing its viscosity and allowing it to flow.

With the help of gravity, the now-mobile bitumen and condensed steam flow to the lower producer well where they are pumped to the surface for transport, separation, and partial upgrading. Laterally continuous, horizontal mud beds act as barriers to the steam chamber, either slowing or completely stopping its growth. SAGD is not currently economically viable for reservoirs less than 7 m in net pay thickness.

Upper or lateral water and gas reservoirs, which are in association with the bitumen reservoirs, may act as thief zones (fluids, other than bitumen, within the reservoir that steal steam energy), to the steam chambers.

Cyclic-steam stimulation (CSS) also known as the "huff and puff" method, consist of 3 stages: injection, soak, and oil production. Steam is injected into a well at a temperature of 300 to 340°C for a period of weeks to months to heat the oil in the surrounding reservoir to recover approximately 20% of the original bitumen in-place (OBIP). In comparison steam-assisted gravity drainage recovers over 50% of OBIP.

This process is predominantly a vertical-well process, but it could be applied on multilateral horizontal legs and would consist of alternately injecting steam and producing heavy oil and steam condensate. CSS works best in thick pay zones(>10m) with high porosity sands (30%).