In projecting production volumes, we used

We used a model that also considers prices, royalties, taxes, capital costs, and other costs. The model calculates a net present value for representative wells (wells exhibiting average initial productivity rates, length, depth, decline rates, and other characteristics common to an area) for all years within the forecast period, which forms the basis of the forecast. The forecast considers limiting factors such as current and future capital market conditions and remaining reserves. 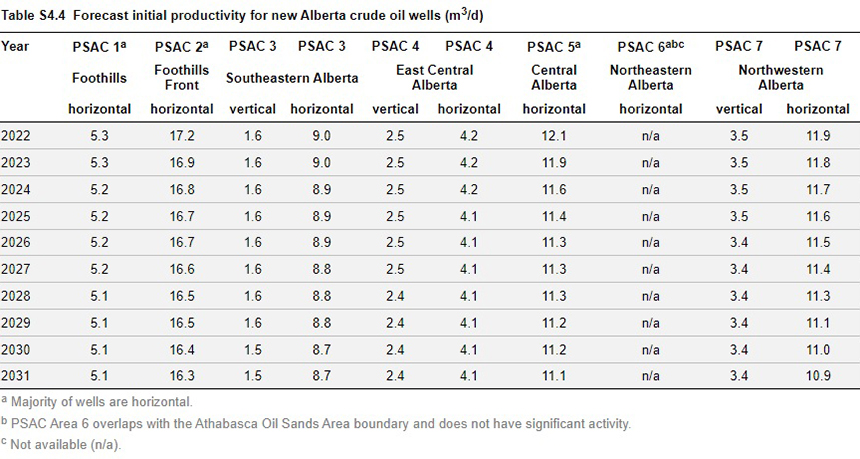 Assumed decline rates in Table S4.5 will vary depending on such factors as the well's age, type, and geological location.

Removals: Removals are the difference between Alberta production and Alberta demand.

The following data were used to derive a supply cost estimate for the average horizontal or vertical/directional well in each Petroleum Services Association of Canada area:

The supply costs are not risked (i.e., assumes a 100 per cent success rate) and are estimated as wellhead costs, which are reported in Canadian dollars.

The AER define a supply cost as the minimum constant dollar price needed to recover all capital costs, operating costs, royalties, taxes, and earn a specified return on investment. The supply cost calculation determines a dollar value required per unit of production.

The supply costs are based on representative wells in each PSAC area. Supply costs for different geological plays and PSAC area vary significantly because of differing production rates, well types, drilling costs, operating costs, royalties, and other factors. Therefore, the results may not reflect wells that differ from the representative well profiles used in the analysis.

All 2021 data are reported by industry until the end of December and do not include any subsequent amendments. The AER use crude oil production volumes submitted to Petrinex by producers.