Hydrogen is an energy carrier and one of the most abundant elements on earth that can be the fuel of the future. Hydrogen is a colourless, odourless, and flammable gas found almost everywhere on earth but only combined with other elements, such as carbon, and oxygen.

Hydrogen can be produced from natural gas by either steam methane reforming or autothermal reforming methods. These methods introduce high-temperature steam and a catalyst to methane, producing hydrogen, carbon monoxide, and carbon dioxide (CO2). With additional processing, carbon monoxide is converted to CO2. The following figure from the Canada Energy Regulator shows the three types of hydrogen and their by-products. 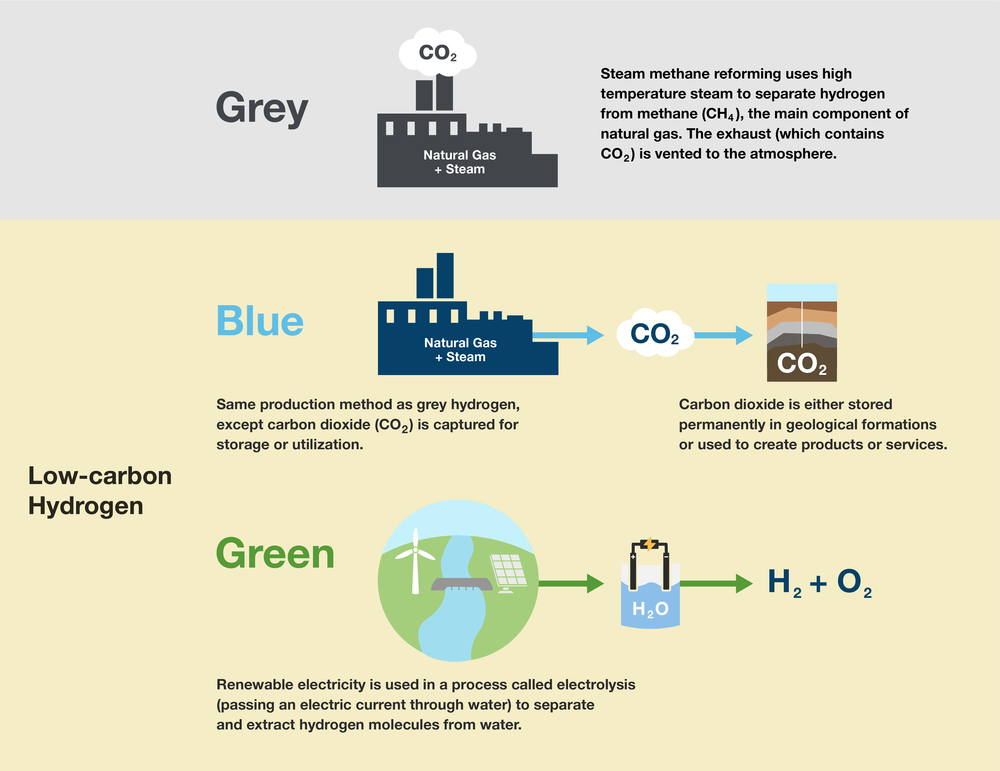 There is an opportunity for hydrogen to replace fossil fuels as a carbon-free energy source. Hydrogen-powered electric vehicles have zero emissions, whereas gasoline vehicles emit carbon monoxide, CO2, hydrocarbons, and nitrogen oxides—all sources of air pollution.

Global hydrogen demand is driven by the refining and industrial sectors. However, it is expected to expand to other sectors, such as transportation, power generation, and heating. In parallel to the growth in hydrogen demand, the end-uses for the CO2 captured from blue hydrogen production are developing. The potential applications of captured CO2 are growing. Potential uses for CO2 include yield boosting (e.g., greenhouses, fertilizer), heat transfer fluid, welding, building materials, chemicals, and fuels.

The federal government has set a hydrogen strategy for Canada, leading to actions that will establish hydrogen production to achieve Canada's goal of net-zero emissions and be a leader of clean and renewable fuels by 2050. The near-term demand for hydrogen will be influenced by the market readiness of applications (see the Technology Readiness Level (TRL)1) and commercial applications (e.g., heavy-duty trucks, power generation, industrial feedstock, and heat for industrial sites).

Alberta's hydrogen plan is aligned with that of the federal government. As a world leader in hydrogen production and carbon capture, utilization, and storage (CCUS), Alberta can be a major player in clean hydrogen production, transportation, and use. The Alberta's Industrial Heartland region near Edmonton has the advantage of becoming one of the first hydrogen producing hubs in Canada. It has access to plentiful natural gas and potential CCUS sites, an existing hydrogen pipeline, and two CO2 pipelines. Leveraging the existing infrastructure will reduce the upfront production costs of new blue and green hydrogen projects. Alberta has several advantages that include experience and technical capacity in producing, handling, and using hydrogen at the industrial scale, positioning the province as the largest hydrogen producer in Canada today. The province has the necessary skilled labour that pioneered Canada's energy industry to support the emerging clean hydrogen economy.

Production in 2021 and Forecast

Limitations or Risks to the Outlook

Currently, the construction of hydrogen facilities (blue or green) is not cost-effective. Hydrogen production is expected to become competitive as carbon taxes increase in the coming years. The economics of the hydrogen industry depend on climate change policies and government support, with associated risks. These dependencies and current high investment costs would probably affect short-term investment decisions. Several actions can be taken to improve hydrogen economics and reduce investment risk: