Marketable gas is natural gas that remains after raw gas is processed (to remove nonhydrocarbons and heavier natural gas liquids) and meets specifications for use as a fuel. Marketable natural gas volumes are referred to as either the actual metered volume with the combined heating value of the hydrocarbon components present in the gas (i.e., "as is" gas) or the volume at standard conditions of 37.4 megajoules per cubic metre (MJ/m3). The average heat content of produced natural gas leaving a field plant is estimated to be 39.2 MJ/m3. This compares with a heat content of about 37.0 MJ/m3 for coalbed methane (CBM).

Marketable natural gas production volumes for gas are calculated based on production data from the section on supply and disposition of marketable gas in ST3: Alberta Energy Resource Industries Monthly Statistics. 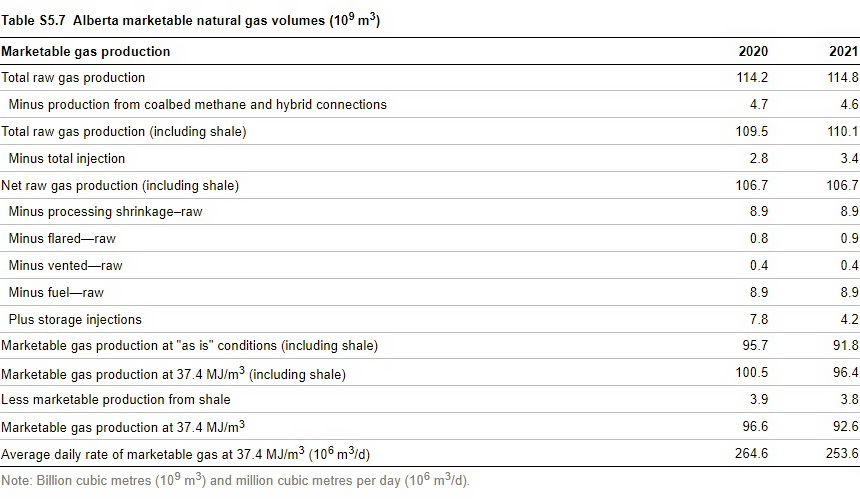 Natural gas production from CBM and shale gas wells is determined separately. As shale and CBM producing wells are re-evaluated based on new information, historical annual values can change.

Although tight-gas volumes are included in the AER's natural gas reserves and production reporting, it is often difficult or impossible to separate the tight portion of the reserves or production of a conventional reservoir.

Our forecasts also account for estimates of the remaining established and yet-to-be established reserves of natural gas in Alberta. We use the Modernized Royalty Framework to estimate royalties.

A net present value (NPV) is calculated for representative wells for all years of the forecast period and forms the basis of the forecast. Limiting factors, such as current and future capital market conditions and remaining reserves, are also considered.

Gas production from oil and gas wells is forecast separately from conventional and tight, shale, and CBM wells. All projections are combined for a total marketable gas production forecast for Alberta. Continual reclassification of CBM and shale wells placed on production results in revisions to historical data and, therefore, changes to annual forecasts.

Table S5.8 shows the forecast of initial average productivity for new natural gas (by Petroleum Services Association of Canada (PSAC) area), shale, and CBM wells. These numbers form the basis of the average well productivity over time and are paired with the number of producing wells to forecast production. IP rates are expected to decline in most areas except for horizontal wells (with continuous technology improvement) and wells targeting productive plays in the province such as Foothills Front and Northwestern regions. 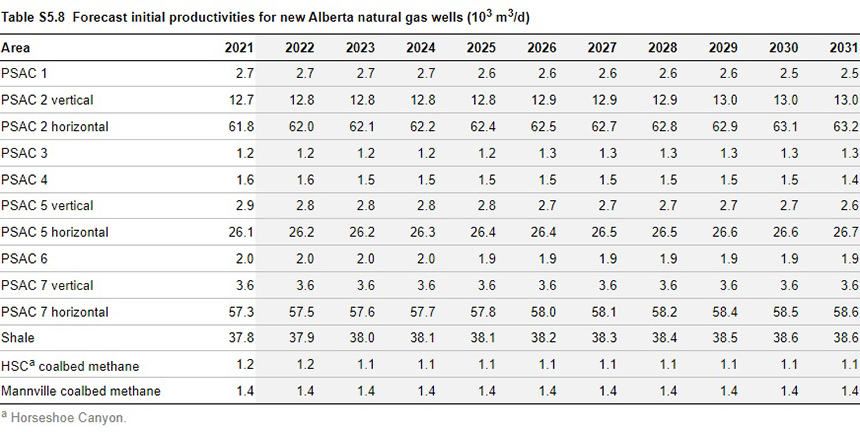 To project natural gas volumes, we rely on data from the associated decline rates (Table S5.9). Decline rates for gas production from gas wells vary depending on factors such as the age, type, and geological location. 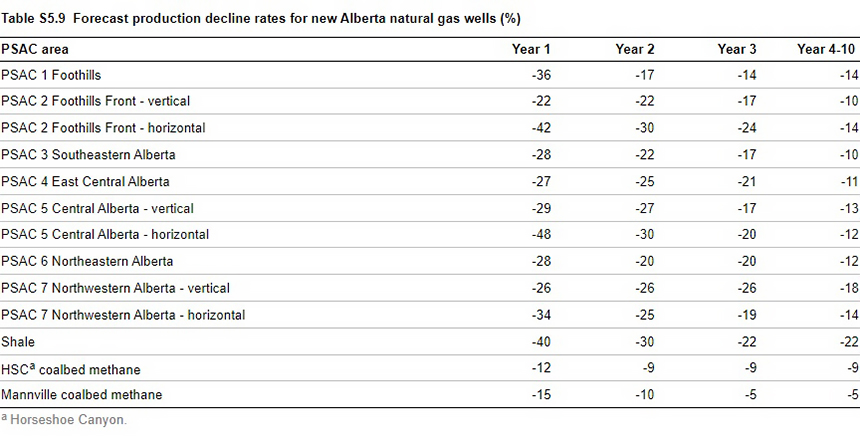 The demand forecast for Alberta is based on a sector-by-sector analysis of past, present, and future drivers of natural gas use. For example, forecasts for sectors such as oil sands and electricity generation are dependent on other forecasts, such as crude bitumen production.

A supply cost, or "breakeven" price, is the minimum constant dollar price needed for an operator to recover all capital expenditures, operating costs, royalties, and taxes, as well as to earn a specified return on investment. It is expressed as a dollar value required per unit of production.

The supply cost estimate for an average horizontal or vertical/directional well in each area includes the following parameters:

The supply cost estimates are not risked (i.e., assumes a 100 per cent success rate) and are estimated at plant-gate prices, which are reported in Canadian dollars. Representative wells in the Foothills, Foothills Front, Central, and Northwestern regions of Alberta (PSAC areas 1, 2, 5, and 7) and the representative wells for shale wells are assumed to produce wet gas.

The AER uses natural gas production volumes submitted by industry to Petrinex. Petrinex is a secure, centralized information network used to exchange petroleum-related information. All 2021 data is as reported by industry up until the end of December and does not capture any subsequent amendments.