After a steady production in the last two years, average daily production of marketable natural gas in Alberta declined in 2021 to 276.7 million cubic metres per day (106 m3/d) or 9.8 billion cubic feet per day (Bcf/d). This is a 4 per cent annual decline. The lower production was largely driven by declines in conventional gas production due to the lagged production response from new wells.

By 2031, marketable natural gas production is expected to slightly grow to 281.0 106 m3/d (10.0 Bcf/d). Rapid production increases are expected across the Foothills Front and Northwestern regions of the province (Petroleum Services Association of Canada [PSAC] areas 2 and 7). These gains, however, are expected to be mostly offset by declines from other regions of the province. 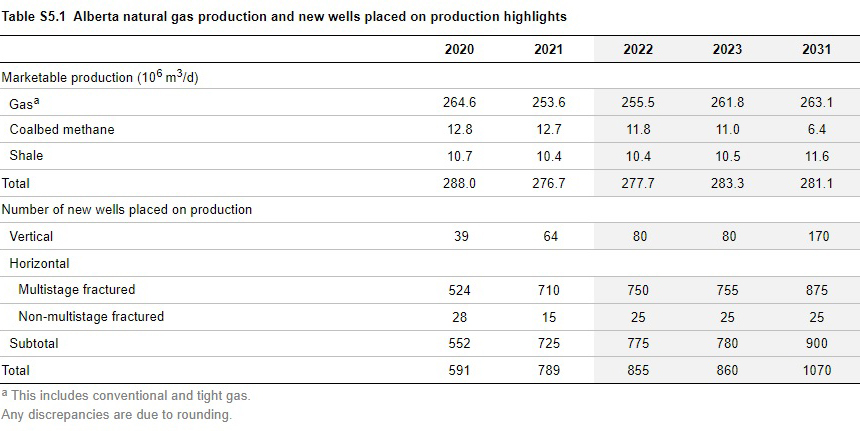 Three trends are expected to continue over the forecast:

Given these trends, most new natural gas wells in Alberta are expected to come online in the Foothills Front, Central (including shale gas), and Northwestern regions (PSAC areas 2, 5, and 7). Despite an anticipated growth in new wells placed on production, marketable gas production in Alberta is forecasted to grow only slightly by 2031. Production of new wells in these areas will be mostly offset by declines across other regions of the province.

Oil Sands Gas Production and Use

Oil sands operators use process gas and produced gas for fuel and feedstock to generate electricity, steam and hot water for on-site operations, and hydrogen for upgrading units. Process gas is also sent to processing facilities for the removal of high-value liquids.

Gas use by the oil sands sector increased by 7 per cent from 2020, reaching 101.2 106 m3/d (3.6 Bcf/d). This growth reflected higher output from oil sands operations due to high crude oil prices resulting from a strong demand recovery.

Oil sands gas use is expected to reach 130.7 106 m3/d (4.6 Bcf/d) by 2031, a 29 per cent increase from 2021. Although total gas use increases in line with bitumen production, the bulk of the incremental gas use is gas purchased for in situ bitumen recovery. In situ operations use a high volume of natural gas and account for most of the bitumen production growth in the forecast, which triggers increased demand for natural gas.

Table S5.2 shows the average use rates of purchased gas for oil sands operations in 2021.