The Montney Formation is in the northwest part of Alberta. Historically, it has been a conventional oil and gas target in areas where permeability is high. Horizontal multistage fracturing has now opened new viable exploration targets. As a result, the Montney Formation, once a minor producer, has become one of the most active targets in Alberta.

Figure R2.3 shows the extent of the Montney Formation in Alberta and the division of the formation into five geological plays. 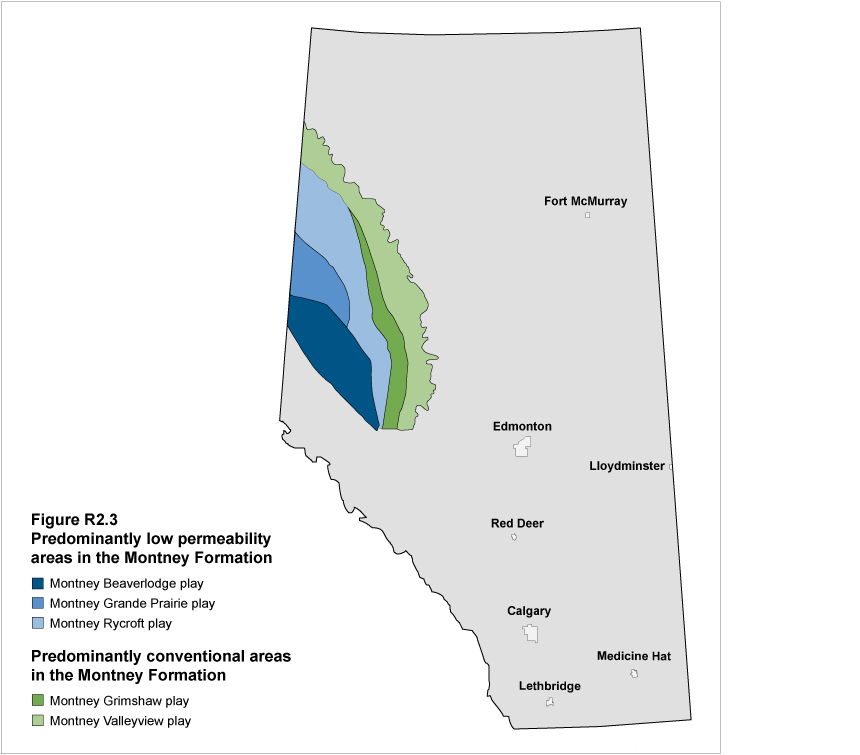 The Montney Formation was deposited during the early Triassic over 247 million years ago. The eastern margins of the Montney Formation were deposited along a bow-shaped shoreface. The depositional environment transitions to the offshore in the west. The lithology of the Montney includes sandstones and dolostones in the east and mainly fine sandstone to siltstones in the west. The formation is nearly 300 metres (m) thick in the west, thinning to a zero edge in the east and ranges in depth from about 700 m in the northeast to 3500 m in the southwest as measured from the ground surface to the formation top. In areas with great thickness, companies are targeting multiple layers.

The AER has subdivided the Montney Formation into five plays:

The estimates below are based on horizontal multistage fractured wells in the Beaverlodge, Grande Prairie, and Rycroft geological plays, which represent the low-permeability areas of the Montney Formation.

The total remaining proved plus probable reserves are

Table R2.3 shows the initial and remaining reserves for the low-permeability resources in the Montney Formation.