The Cardium Formation has been prominent in Alberta since oil was discovered in the Pembina field in 1953. Since 2009, the AER has seen renewed interest in this formation, with horizontal multistage fracturing technology showing success in accessing previously inaccessible reserves in the tighter halo areas adjacent to the historically targeted higher porosity and permeable pools. Despite reduced drilling in today's environment, the Cardium Halo remains a target for new development in Alberta.

Figure R2.1 shows the extent of the Cardium Formation in Alberta and the location of the West Pembina assessment area. 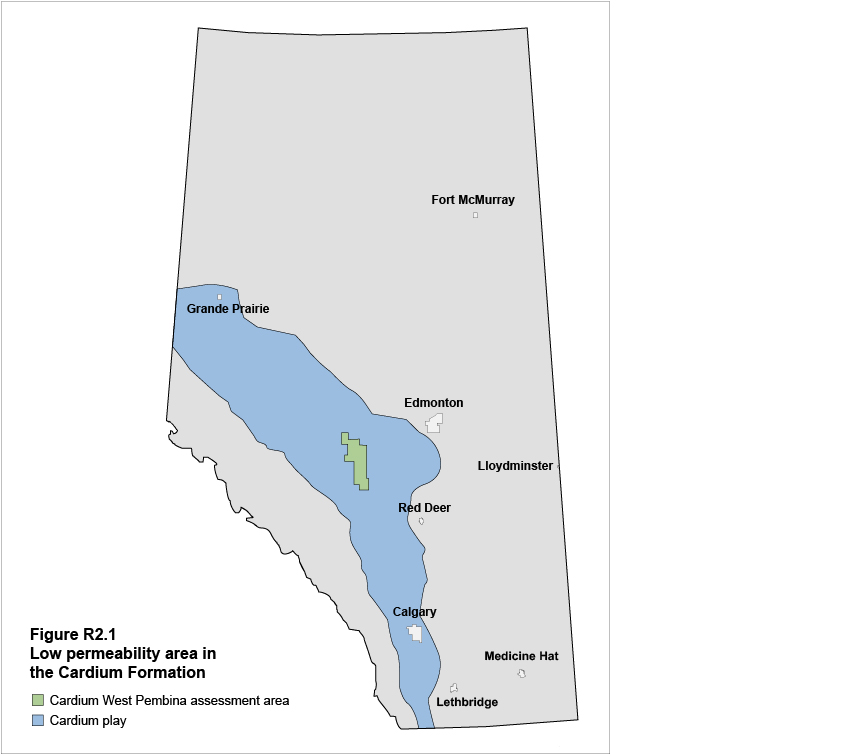 The Cardium Formation was deposited in the late Cretaceous, over 86 million years ago, in mainly marginal and shallow marine environments. In the Pembina field, this formation is divided into two members: the Pembina River and the overlying Cardium Zone.

Depth to top of formation for the West Pembina assessment area ranges from 1500 metres (m) in the northeast to 2200 m in the southwest.

Most horizontal drilling in the Cardium Formation has been within the tighter areas of the West Pembina assessment area, with 17 horizontal gas wells and 993 horizontal oil wells.

The estimated total remaining proved plus probable reserves are

The evaluation of reserves in this section is limited to horizontal multistage fractured wells completed within the Cardium Formation.

Table R2.1 shows the initial and remaining reserves for the low-permeability resources in the West Pembina assessment area of the Cardium Formation.