Figure S3.1 shows the average daily production of crude bitumen in Alberta, including volumes from in situ projects.

In situ production increases occurred across all recovery methods, with the largest volume increases observed at steam-assisted gravity drainage (SAGD) operations. As shown in Figure S3.2 and Table S3.2, in situ production increases in 2021 were almost entirely attributable to growth in the Athabasca region. Volumes declined slightly in the Cold Lake region, where capital expenditure in recent years has been lower compared with the Athabasca region. 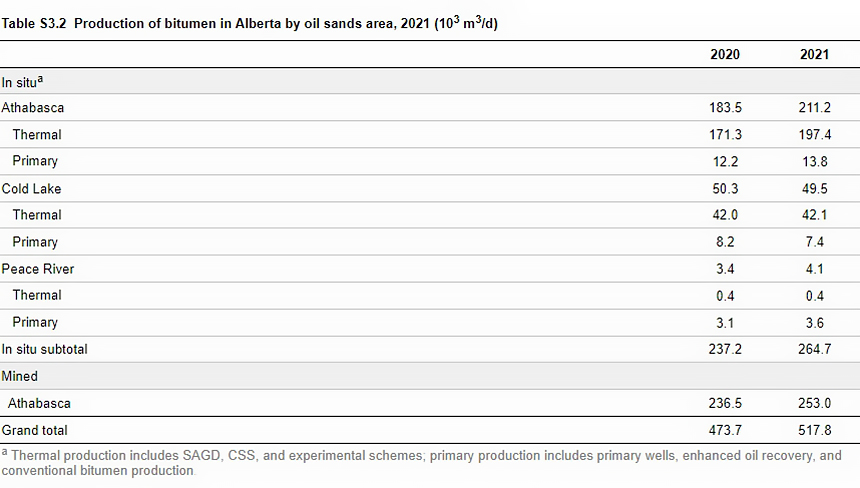 Production data by project are reported in the ST53: Alberta In Situ Oil Sands Production Summary. The following are the highlights for 2021 in situ bitumen production:

A list of proposed projects considered in the forecast is included in the methodology section.

In line with improving market conditions, in situ bitumen production volumes are expected to continue their growth in the near term (Table S3.1). By 2031, in situ output is forecast to increase to 367.7 103 m3/d (2313.9 103 bbl/d). This represents annual growth forecast of 3 per cent.

Near-term production increases in the forecast are based on improving market conditions and producers adding capacity at their existing facilities. Production growth is expected from already sanctioned projects coming online by the middle of the decade.

In situ will be the main source of bitumen production growth in the forecast and will be affected by transportation capacity developments. Takeaway capacity on the province's pipeline infrastructure is forecast to improve in the next few years through pipeline enhancement projects and the completion of the Trans Mountain Expansion project scheduled for completion in 2023. Growth later in the forecast is supported by improved market access, higher oil prices, and approval of new expansion projects by producers.

Based on crude bitumen supply costs estimates for 2021, small-scale in situ projects continue to be more economical than other types of in situ or mining projects. Given the crude oil price forecast, it is expected that most new projects over the next decade will be in situ projects.