Geothermal energy is heat originating from below the Earth's surface that can be used for heating or generating clean electricity. Geothermal heat sources include heat created by:

Geothermal resources are a potential alternative energy source that will help meet Alberta' demand for power and heat. There are many uses for geothermal energy in Alberta:

There are three main geological regions in Alberta (from west to east): the Rocky Mountains, the Western Canada Sedimentary Basin, and the Canadian Shield. Deep geothermal potential is generally higher in the western regions of Alberta.

The potential for deep geothermal development varies across the province based on reservoir temperature, depth, and other characteristics.

There are the two main configurations used for deep geothermal development: open-loop systems and closed-loop systems. These systems can be collocated with existing oil and gas operations.

Open-loop systems involve circulating water from a porous rock formation through wells drilled into the formation. Water will collect in the wellbore as it seeps through the naturally porous rock. Hydraulic fracturing can be used to free water trapped within the formation to flow more easily to the wellbore. Hot water collected in the wellbore is lifted to a geothermal facility on the surface to extract the heat from the water. The now relatively cooler water is injected back into the same formation through other wells where it will be naturally reheated.

Closed-loop systems do not use formation water but rather other types of fluids as the medium to carry heat from a formation. In a closed-loop system, single wells or a pair of horizontal wells are interconnected, and fluids are circulated through the network. Cool fluids are pumped down the wellbore and are heated by the surrounding formation. The hot fluids are then lifted to a geothermal facility on the surface to extract the heat from the fluid. The relatively cooler fluid is recirculated back through the network in a continuous loop. In a closed-loop system, the fluids are entirely contained within the system. 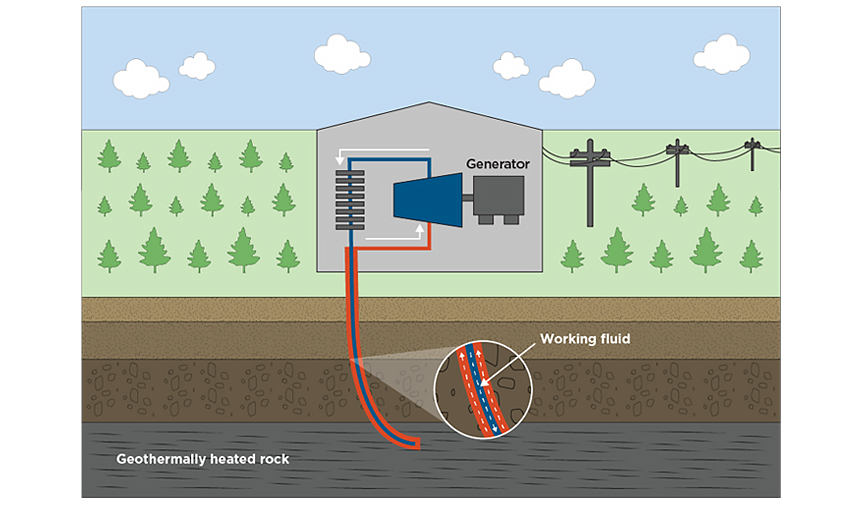 How We Regulate Geothermal Development

On December 8, 2021, the Government of Alberta proclaimed the Geothermal Resource Development Act (GRDA). Under the act, the AER has the authority to regulate the safe, efficient, and responsible development of Alberta's deep geothermal resources.

As the regulator for geothermal development in Alberta, we implement government policy, rules, and regulations associated with the GRDA.

The GRDA builds on Alberta's strong record of responsible resource development by creating a dedicated regulatory framework to allow the development of geothermal resources and establishes the following regulatory responsibilities:

The GRDA applies to facilities and pipelines used solely for geothermal energy production. Wells producing geothermal energy and oil and gas together will continue to be regulated under the Oil and Gas Conservation Act.

As per the Geothermal Resource Development Regulation, a facility associated with a geothermal resource developed for noncommercial use (i.e., used by oil and gas producers for their own operations) is exempt from regulation under the GRDA.

Applying for a Licence

Depending on the type of geothermal development, applicants will need the following:

Directive 089, we describes our holistic approach to liability management throughout the life cycle of geothermal resource development, which includes:

We work to develop and implement liability management programs for all energy sectors, which help to protect Albertans from potential environmental issues and costs associated with the closure of energy projects.

The Government of Alberta has directed us to develop an approach to financial security to ensure closure activities are funded when an operator cannot, thus limiting the risk of unfunded liability for the sector.

Applicants are required to provide at the time of application a security deposit of at least 50 per cent of the total estimated liability of their development and, at our discretion, maintain it throughout the development's life cycle. However, we have the option to collect a security deposit of up to 100 per cent of the total liability estimate if higher risks are identified with the application or as warranted by the holistic licensee assessment.

Applicants are required to provide liability estimates for each asset with their applications. See Manual 012 for details on the approach for determining liability.

We are amending other affected regulatory documents and updating our electronic submission systems to address new application processes.

The development of geothermal resources will be monitored in accordance with our Integrated Compliance Assurance Framework, which helps ensure that companies follow the rules at every stage of development.

Questions about geothermal resource development, including application submission, licences, and transfers, can be emailed to @email or contact our inquiries line at 1-855-297-8311.